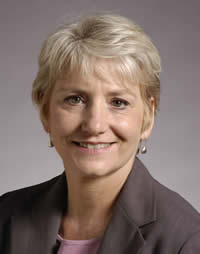 Julie Underwood is the eighth dean of the UW-Madison School of Education.

Julie Underwood, a nationally recognized authority on school law, became the eighth dean of the UW-Madison School of Education in August 2005.

Underwood taught at UW-Madison from 1986 to 1995 on the faculty of the Department of Educational Administration (now Educational Leadership and Policy Analysis). She has returned to Madison after serving from 1995 to 1998 as dean of Miami University’s School of Education and Allied Professions and from 1998 to 2005 as associate executive director and general counsel for the National School Boards Association in Washington, D.C.

At the NSBA, she led a legal advocacy program on behalf of the nation’s public school boards, including producing friend-of-the-court briefs and legal strategies before the U.S. Supreme Court and lower courts. She also was responsible for the 3,000-member Council of School Attorneys.

At UW-Madison, Underwood has served as chair of the Department of Educational Administration (1993-94), associate dean of the School of Education (1994-95), and co-director of the Wisconsin Center for Education Policy at the Robert M. La Follette Institute of Public Affairs (1990-93).

For an extended audio interview of Dean Underwood discussing ALEC, see below.

To read Dean Underwood's ALEC article in The Nation, see below.

During the first half of 2009, she served as UW-Madison’s interim provost, recently returning to her position as dean of the School of Education. During her absence, Adam Gamoran, the School's associate dean for research, served as interim dean.

She has a bachelor’s degree in political science and sociology from DePauw University (1976), a law degree from Indiana University (1979), and a Ph.D. in educational leadership from the University of Florida (1984).

As head of the School of Education, Dean Underwood oversees one of the largest colleges on campus. The School is composed of eight departments and enrolls nearly 2,000 undergraduate students each year. About half of the undergraduates are pursuing teacher-preparation programs; the rest are pursuing such programs as art, dance, rehabilitation psychology, and exercise science. The School also enrolls nearly 1,200 graduate students each year. Graduate students play key roles in many of the innovative research projects conducted at the School.

According to U.S. News and World Report’s 2010 edition of America’s Best Graduate Schools, the UW–Madison School of Education ranks seventh among more than 200 schools of education nationally, with seven of its core programs rated among the top three. The nation’s education deans, surveyed by U.S. News for the annual publication, consistently rate the School of Education’s core graduate programs among the very best. In the 2010 edition, the deans ranked UW–Madison #1 in Curriculum and Instruction and Educational Psychology; #2 in Administration/Supervision, Counseling/Personnel Services, Elementary Education, and Secondary Education; #3 in Education Policy; and #9 in Special Education.

Julie Underwood on ALEC in The Nation